Harrison was most recently seen appearing on Broadway as Dennis in The Play That Goes Wrong during its record-setting run at the Lyceum Theatre. He's been featured in a series of TV commercials for W.B. Mason office supplies, is a frequent collaborator with Calliope Theatre Company and the web series Good Cop Great Cop, an occasional stage directions reader for Roundabout Theatre Company, and an improviser trained at Upright Citizens Brigade and Second City. He's studied acting in London at the British American Drama Academy and in NYC at the Atlantic Acting School.

He also makes short videos (and more) under the name Harrington Plunger.

Here are some nice things reviewers had to say about his acting performances:
OR, AN ASTRONAUT PLAY, The Tank, January 2020

Holding the center is Unger as Tom, and in addition to embodying the rare combination of leading-man looks and goofiness, Unger conveys both Tom’s disappointment at the turn his personal life takes and the character’s ignorance of his advantages. - Off Off Online, Jan. 9th, 2020

Unger as Tom played the role with the perfect amount of naivety that made us love him in the beginning but hate him by the end. Though, the hatred did not make his ridiculous actions any less entertaining. - OnStage Blog, Jan. 10th, 2020

“Maybe Tomorrow” […] seems similarly unlikely to touch emotional chords, but touch them it does, particularly with its sneak-attack ending. […] it’s a comedy that plays with notions of reality and theater, persistently upending perceptions as it sketches a portrait of Gail’s marriage to Ben (Harrison Unger) and her flight from life outside the bathroom door. - New York Times, Aug. 25th, 2015

This is a play you need to see to believe. And once you do, you'll believe in the magic. Mondi's script is good but it's the way Jennifer Bareilles and Harrison Unger play it that make it what it is. […] Harrison Unger provides the perfect support to Bareilles and the play. […] Unger has a knack for finding the humor in the dramatic and the dramatic in the absurdity. […] Maybe Tomorrow is what some would call perfect. The amount of hope and promise in this production and every single person involved is almost unfair. Keep this show and these artists on your radar. - Theatre in the Now, Aug. 23rd, 2015

[…] the show's message of taking the time to understand each other rings loud and clear. And helping bring this message home even further is the amazing duo of Bareilles and Unger. This show is sold out for its entire run and I suspect it has something to do with the cast. Their performances are honest and their chemistry is absolutely noticeable. The pair do a fantastic job humanizing the situation and actually making us care about them. - Theatre Is Easy, Aug. 18th, 2015

Casting everything about relationships into doubt and having fun with it is the great joy of this production. Both performers are so perfect, and so able to make each other (and the audience) happy to inquire into what is not really known. - NY Theatre Now, Aug. 18th, 2015

The cast is generally capable with a few stand outs. Harrison Unger impresses as Nick, with his mustache twitching and his veneer of self-confidence stripping away as the plan starts to unravel. - New York Theatre Review, Oct. 19th, 2012

THE AWAKENING, The Brooklyn Lyceum, August 2012

Harrison Unger as Robert Lebrun […] is warm, sensuous, and sanguine — a perfect picture of an impetuous, boyish lover. His transformation into a shamefaced coward at the end of the play is striking, which serves to underline Mr. Unger’s talent as an actor. - Cultural Capitol, Aug. 30th, 2012 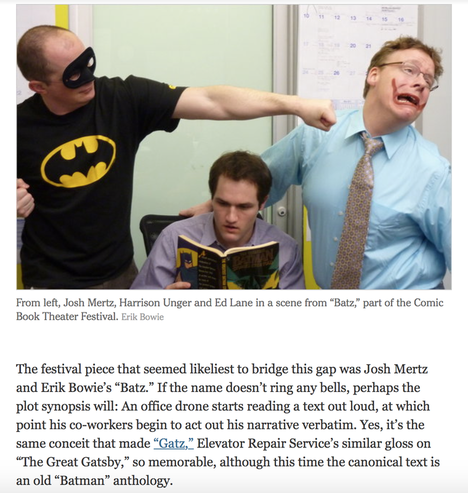